A HIDDEN SANCTUARY IN THE FOREST

Building the Lion Cottage on Brazil’s Discovery Coast, between the hypnotic João de Tiba river and the immense ocean off of Bahia, has been an energizing and fascinating adventure that even now continues to surprise and awe us.

We began construction 30 years ago, before roads, electricity and regular traffic reached Santo André Bahia from the nearby city of Santa Cruz Cabrália.

Everything here was brought aboard canoes and rafts and had to be adapted to the specific conditions of the territory as well as the skills and goodwill of the local workforce. There’s no point in hiding the many and unusual difficulties that periodically threatened our dream, even forcing us to consider abandoning everything.

Originally designed with Mario Medina and  Claudia Damasceno and among a group of friends in the legendary Sargasso bar in Santa Cruz Cabrália, the Lion Cottage slowly emerged from the inspiration of our observations, from the enchanting sunsets spent as the João de Tiba river, calmly lapping the piers of the old port town, slowly poured into the tranquil immensity of the ocean off Bahia to the infinity above us on crystal-clear nights.

To immerse ourselves in all that beauty and live in close contact with nature, we allowed the Cottage to grow in successive stages, without haste, using local materials, respecting the environment and the native vegetation.

The simple layout allowed us to “get our hands dirty”, to personally build our dreams into the structure, even as we were often carried along on an uncontrollable, fluctuating rhythm of intense activity and unexpected standstills.

Our priorities were shaped by our desire to welcome and share our experiences and moments of intimacy with family and friends.

As always, many friends ask us, why the name, The Lion Cottage?

When I was in my 20’s, with all the curiosity and enthusiasm of my youth, I was lucky enough to live in Jamaica during an intense period of island restlessness.

Everything was in turmoil and everything moved at an overwhelming speed. Politics, music, religion, life: it was like the boiling pot spilling over that Perry Henzell described so well in his famous 1973 film, The Harder They Come.

That extraordinary experience continues to live on even today, in my many 45 rpm reggae singles, in the audio tapes I recorded off of Jamaican radios on my “Ghetto Blaster”, in the samples of fruit seeds and vegetables, “primitive” musical instruments, and the collection of lions of all shapes and colors that I had gathered around the island or built together with friends from the Rasta communities of Windsor Forest and Upper Fair Prospect in Portland, where I lived.

Years later, here in Santo André Bahia, all those lions (engraved on wood, cut out on paper, painted on old pieces of wood or on old recycled fabrics) found a second home. Serving as savage symbols, they have shown the uninitiated the way to our wild land ever since the first day we began to receive visitors.

Those stoic Jamaican lions, standing at crucial points in the middle of the forest, did not pass unnoticed, arousing curiosity and also a certain apprehension in younger children in the area. Some even thought these signs were there to warn travelers of the presence of the ferocious animal in the vicinity!

From then on, many lions, in all different forms, have stepped up to carry on the tradition, replacing older lions ravaged by their life in the wild, but always faithfully continuing to point the way for our friends.

Today, everyone in Santo André knows the entrance to the “sitio do Léao” and, in those Jamaican origins, the Lion Cottage was born. 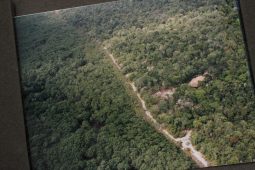 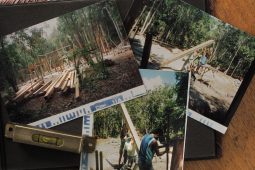 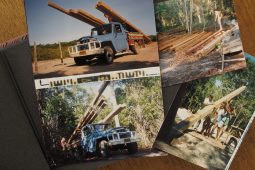 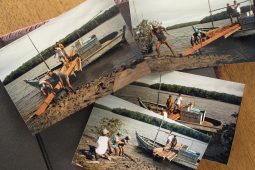 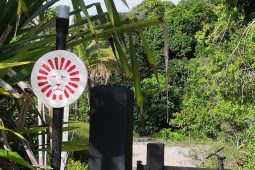 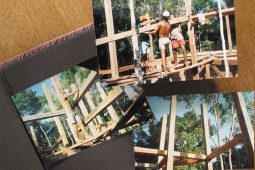 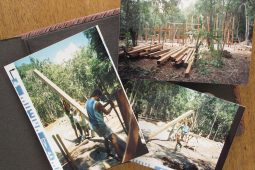 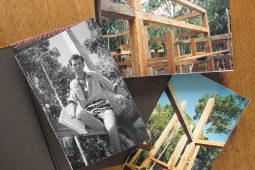 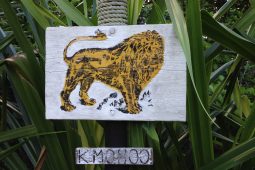 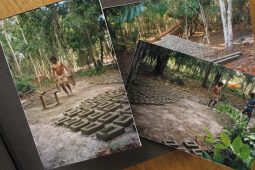 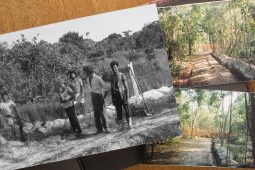 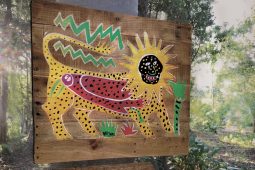